Okayama Shrine is the main Shinto shrine in central Okayama City. First built in 860 A.D., Okayama Shrine was located where Okayama Castle now stands. This place was called “Okayama.” In 1573, when Feudal Lord Ukita started constructing the new castle, the shrine was relocated to its current location. The main and the front shrines were built by Ukita. The deity of Okayama Shrine was worshiped as the guardian of the castle during Lord Ikeda’s rule (1603 – 1868). In 1941, the roof of Okayama Shrine was retiled, the sanctuary was repaired, and offices were added. In 1945, during World WarⅡ, most of the buildings except for the shrine gate were burned down by air raids. After the devastating war, the main shrine was reconstructed in 1958. In 1975, the front shrine was added, and in 1988 the hall and the office were completed. Today, Okayama Shrine is revered and worshiped by many people as the deity of the city. 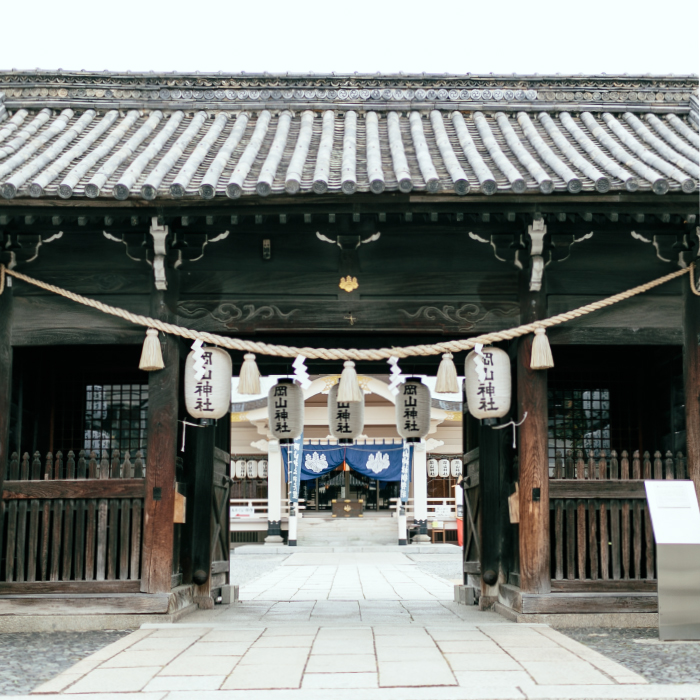 The gate is one of the few original buildings that was built during the Edo Era(1603 – 1858) in Okayama. It was built in 1745 by the Feudal Lord, Tsugumasa Ikeda. It is designated as a historically important property of the city.

The princess of Emperor Korei, the seventh Emperor, and also the sister of Kibituhiko (the model of Momotaro). According to legend, she had a strong psychic ability and wisdom, and she controlled an epidemic with prophecy.

How to give a prayer at a Shinto shrine.